Recently I’ve been thinking about some of my favorite slasher movies from the past few years, and I noticed that a common theme is with movies where the final girl is a little different than the trope has traditionally portrayed her. It can be her skills, wiles, looks, motivation, or a combination of these things, but she is definitely doing more than just running and hiding. By and far, I would have to rate You’re Next as my favorite slasher film of recent time, and while the final girl is part of the reason why this is a great movie, there are a few other things that help it stand out, as well: 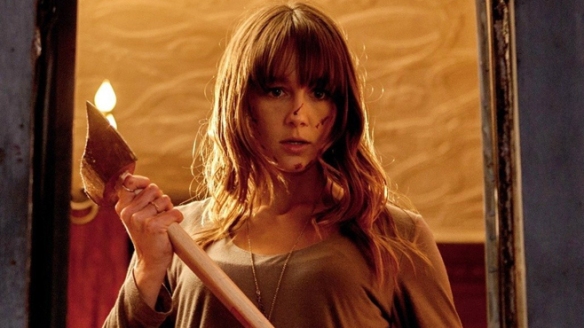 NOTE: From here on there may be spoilers, so if you haven’t seen the movie yet, and don’t want to know too much, be forewarned.

Erin, is set up early in the film to be the final girl. She’s the one that is different – outside the family, from a different class, and basically sane. When the invasion starts, she remains calm, assesses the situation, and makes recommendations that will help save lives. It quickly becomes clear that she’s a survivor. However, Erin isn’t just a survivor. She’s not just running away from the attackers, or hiding to try to avoid them. Erin soon proves extremely adept at setting traps around the house, is more than able to locate usable weapons within the house with which to arm herself and others, and can then wield those weapons with a death dealing frenzy. She also knows first aid and is able to calm down and protect others.

When it becomes clear that she has been involved in the situation purposefully, she doesn’t break down and cry. She also doesn’t just forgive and forget. She is capable and willing to take her revenge. But is it really revenge, or is she actually just protecting the world from a freaking psychopath? This final girl has guts, smarts, physical strength, and chutzpah, and the way she uses her wiles makes her a different kind of survivor.

So, if you haven’t watched this slasher movie yet, I highly recommend it as an example of how the genre and the final girl trope are morphing into something new and interesting.

1 thought on “This Final Girl is Different: Part 1 – You’re Next”