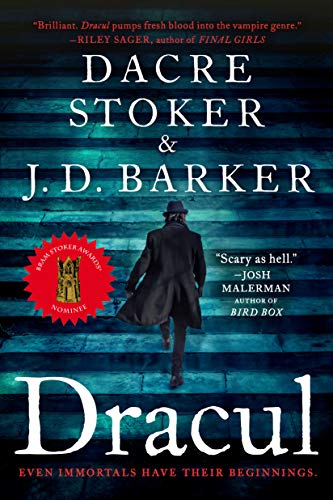 Even casual horror readers will likely be familiar with the fact that Bram Stoker’s Dracula is a foundational classic in the genre. Over the years, the vampire trope has spawned a multitude of variants from the more civilized ones in Anne Rice’s and Stephanie Meyers’s sprawling series, to the more brutish type found in the works of those by Brian Lumley, and Guillermo DelToro and Chuck Hogan.

In 2018, the great-grandnewphew of Bram Stoker co-wrote with J.D. Barker, Dracul, a prequel to the classic that claimed to draw on “scholarly research of the original, unedited version of Stoker’s 1897 tale of the undead count, as well as Stoker family legends.” The origin legend of the classic contends that the first 102 pages of the original manuscript for Dracula submitted by Stoker were cut, and that in those pages information was included to prove that the story was, in fact, not fiction. The publisher determined those pages too terrifying to include within the work – a thrilling concept and one that would seem destined to intrigue many modern day readers. Additional interesting information can be found regarding the historical aspect here.

The book crafted by Stoker and Barker is intriguing and immediately captured my attention due to the threat of impending kinder-trauma. We are introduced to a young Bram Stoker still living at home with his parents and siblings, and learn that Bram suffers from an unnamed disease that causes him to be extremely weak and in ill health, and which has kept him confined to his room for the majority of his short life. The family has hired a nanny, Ellen Crone, to help take care of the brood of children, and it is this mysterious nanny who is the focus of the book. Ellen has managed to revive Bram several times when he became so sick that it was feared he would die, but her methods are mysterious and extremely secretive, and seem to require her to disappear for several days afterwards. After saving him from one particularly disastrous episode of illness, Bram emerges a changed child. Suddenly he has energy and appetite, and he is able to easily leave his room and participate in lengthy and somewhat arduous investigative excursions with his sister as they delve ever more deeply into the secretive life of Ellen. It is a mystery that is destined to occupy them for many years of their lives, and one that eventually brings the siblings back together as young adults for a final confrontation with Ellen Crone and the dark secrets of her past.

I found many themes within the book that are common to those found in Dracula, and it seems to work well in establishing the behaviors and events that we find in the later classic as existing in part of a larger pattern that has been followed for centuries by the creator vampire. There were many interesting touches that I particularly enjoyed, such as the elusive nature of Ellen Crone’s looks – Bram’s sister finds it impossible to capture her likeness in a drawing, which seemed an interesting play on the idea of vampires not being visible in mirrors. The character development is engaging, descriptions of the settings and scenes are lush and detailed, and I often felt transported back in time as a witness to the frightening situations.

This book is a great pick for any readers who enjoy period horror and the specific type of vampire created in the classic work. It also looks like it has been optioned for movie rights, so we may see an interpretation of it on the big screen some day.

Over the pandemic I decided to revisit some of my favorite vintage horror from high school. There were several titles that I remembered as being pretty scary, and a few that I couldn’t even remember the title or author for and had to do a little investigative work to figure it out. One of the latter was Rick Hautala’s Night Stone, which I vaguely remembered as having something to do with stones that a guy would see in his yard when he was dreaming, and as a book that had been creepy enough to kind of stick around in my head over the years. Once I figured out who had written it and the title, I managed to secure a reasonably priced copy online. It even has the original creepy cover that goes between little girl face and skull that I remembered!

Night Stone has everything: a house deal that seems too good to be true, a creepy haunted doll, a possessed horse, underground terror (that is possibly from a Native American burial ground or sacrificial site), family drama with distracting sexual indiscretions, and some bloody deaths orchestrated by the presence haunting the land.

Don decides to move his family – wife Jan and daughter Beth – out to the country and into an older family-owned house that his sister has been taking care of for years. We learn that his mother hadn’t wanted anyone in the family to live in the house and that his sister hadn’t been able to sell it (never a good sign). Problems start immediately as Beth has some type of seizure as they are driving past the large gateposts of the house, and then escalate when she finds a creepy old doll and becomes obsessed with it. Jan becomes bored with the new situation almost immediately and takes a job waiting tables at a pretty sleazy sounding bar and grill in town, and Don becomes increasingly obsessed with the house and with a large stone that he uncovers in the yard. Archaeologists are called in, additional unsanctioned digging is conducted, weird noises and dreams start taking place, and Beth begins talking to her doll and letting it influence her personality. Beth finally gets the horse she’s been begging for and it turns out to be a nightmare on four legs. And, as we’ve seen before in these cases, Don increasingly becomes more unhinged, and the wheels completely come off of the entire enterprise by the end of the book.

The main things I noticed re-reading this book about 30 years later were that it was a lot more crazy than I had remembered. Dolls always creep me out, but the idea of a girl Beth’s age carrying some monstrosity like this around with her everywhere and whispering to it continuously is just a big “nope” for me. (The doll described in the book looks nothing like the somewhat normal one pictured on the cover, so be fair warned!) Also, the entire horse aspect of the plot was both crazier and sadder than I had remembered. All the girl wanted was a sane horse that she could ride around on the farm, and instead she got Goblin, the horse from hell. Lastly, the size of the huge, sacrificial stone in the front yard that Don keeps digging up, along with the underground tunneling aspects of the story, were parts I had completely forgotten. I am not a big fan of tight, underground places, so this part definitely gave me the creeps.

If you are looking for a vintage horror read that delivers nicely on a lot of the typical tropes we think of from the ’70s and ’80s, then I recommend checking out Night Stone. Rick Hautala has also written some other books and short stories that terrified me over the years, such as Mountain King. He’s definitely a horror author worth checking out!