Here are a few things that I’ve been reading: 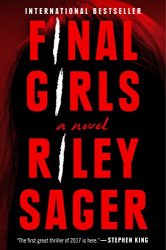 Quincy Carpenter is one of only three “final girls”, each of which survived a massacre in different areas of the country.  While Quincy survived her ordeal, her memory did not and she has no recollection of most of what happened that terrifying night. However, at the beginning of this book, she is not doing too badly. She has a fiance and a successful cooking blog. But when one of the final girls, Lisa, commits suicide, it seems so out of character that Quincy becomes determined to figure out what really happened. The appearance of the third final girl, Sam, further complicates matters, and soon Quincy is struggling to figure out not only who she can trust, but also the truth of what happened to her that night, and it soon becomes clear that her life is depending on her figuring out the answers.

This book has a great thriller pacing to it, and I found the story to be engaging. Sager drew me in quickly with the idea of playing with the final girl trope. I know it’s something that’s been done a lot at this point, but Sager works to keep this fresh and different. The story kept me guessing until the end and it was definitely a fun read!

What Should Be Wild by Julia Fine 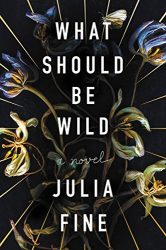 Maisie Cothay grows up with an unusual curse: anything she touches dies – or is revived. She lives on an estate at the edge of a mysterious forest, isolated from the world around her because of her condition. Her father, and pretty much everyone, has warned her not to go into the forest, and there are many legends of local men who have gone missing over the years. What Maisie additionally learns, though, is that many of the women in her family – ancestors from years gone by – have also gone missing in that forest. However, when Maisie’s father goes missing, she dares to venture into the forest in search of him, and she finds much more than she had bargained for.

I love the fairy-tale feel of this book, but it is not soft and pretty, there is definitely an edginess to it. It is frightening in some areas, and the fantasy elements have a darkness that I always enjoy. The resolution of this book, is interesting, but I think I mostly enjoyed the telling of the story itself. Maisie has an interesting viewpoint and her struggles with her condition and those around her lend a loneliness that makes the story even more haunting. Recommended for those that like Neil Gaiman’s The Ocean at the End of the Lane. 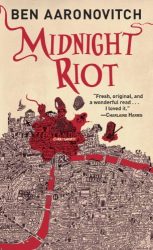 Constable Peter Grant is just starting his career and hoping that he won’t be assigned to what is basically desk duty. However, his fortune changes when while assisting with a murder investigation he is approached by a ghost – offering him information. This odd interaction leads to him being assigned to work with Detective Chief Inspector Thomas Nightengale, who works on those sorts of cases, and who also happens to be a wizard. Peter and Nightengale team up to investigate a mysterious string of murders. Along the way, they are assisted by a variety of water elementals, each of whom is a different river that flows through the city. Throughout it all, Peter struggles to master his own growing magical skills, and become acclimated to his new role.

I loved this book and will probably devour the series! This would probably fall more into the urban fantasy genre, and readers of Jim Butcher’s Dresden series will probably enjoy this, as well. As the story developed and I learned more about the case, I was pleasantly surprised at how very original this idea was!

Check back in for more posts soon! I’ve been reading and watching some great stuff, and there are some new releases that will be coming out soon that are going to make for some excellent reading! 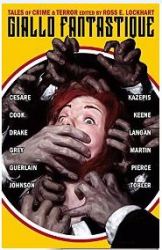 One of my favorite film genres is, without a doubt, the giallo. The giants in this area – Argento, Bava, Lucio – provide such an interesting mix of mystery, murder, noir, and always just a touch of something a little more. Usually it’s something twisted or paranormal or just outright frightening. So, when I saw that Word Horde was going to be putting out Giallo Fantastique, a collection of stories in the giallo genre, I was definitely excited!

Ross E. Lockhart has directed a collection of twelve stories by some of the best names around. In his introduction he discusses his choice for the title, as well as the use of the color yellow, which he explains became connected to the idea of decadence in the early 19th century. Decadence, weird crime, and fantastic horror weave through each of the stories, and there is something here for everyone.

I found “Minerva” by Michael Kazepis and “In the Flat Light” by Adam Cesare to be the most closely related to the feel of giallo that I am used to seeing on the screen. Twisted murders and protagonists who are faced with nightmare-like circumstances play a part in both of these stories, and leave the reader with a sense that the world has been moved bit by bit out of the norm until it careens disturbingly out of control.

Orrin Grey’s “The Red Church” was also one of my favorites. There is a nice mixture of horror elements in this story. Grey’s protagonist is a reporter on a quest to interview an elusive artist, and several of the stories in this collection involve individuals who are interviewing or writing biographies, a plot device that works well and differently in each situation. I enjoyed seeing how each of the authors using this technique went about creating their story.

Possibly the most original take on the genre was “Hello, Handsome” by Garrett Cook, which introduces us to both an unusual protagonist and killer. I also enjoyed Anya Martin’s “Sensoria”, which brought in a bit of the gothic and used fantasy and suspense to weave a darkly beautiful tale that will haunt me for some time to come.

John Langan’s “The Communion of Saints” works from the point of view of a detective who is plagued with a series of murders by some extremely interesting criminals, a case which ends up taking him somewhere completely unexpected. I loved the various elements that he brought into this story – horror, weird, giallo, mystery – they are all combined and melded together in a really ingenious way.

I don’t want to say too much about these stories and give all the goodness away. I will say that there are also stories that pull in some science fiction, move more into the dusky recesses of the erotic, dip their toes into true-crime, and test the borders of a variety of different genres and worlds. In short, Giallo Fantastique is special, original, and impossible to put down. You’re going to want to curl up on a rainy evening with your glass of bourbon, turn the lights down low, throw something from Goblin on repeat, and just dive right in.