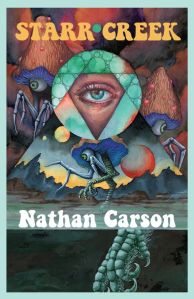 Recently I had the distinct pleasure of receiving an advance copy of Nathan Carson’s new novel Starr Creek. It took me a bit to get to sit down and read it because I was waiting to give it my full attention. So, not long ago I got comfy on my front porch and dipped in – and it took me for an amazing ride!

The story follows two sets of kids: an older group who are busily experimenting with a smorgasbord of mind altering substances, and a couple of younger boys who are more concerned with riding 3-wheelers and getting hold of some choice adult magazines. Both groups cross paths with a rather terrifying back woods family, and end up having to deal with something else … something not human.

Carson draws the reader in quickly by moving from an opening scene involving a discussion of an ancient deal between two dark creatures to a dog food eating contest in the local dive bar. During this contest we meet Puppy, the eldest male member of a family, the type of which you will probably recognize simply from his name (or that of his sister, Kitty). Puppy brings a very real atmosphere of physical violence, and it is soon made clear that he is not a person to be trifled with. Teens Bron, Allen, and Kira are mainly concerned with role playing games and tripping, and on an early morning trip in the woods have the unfortunate luck to stumble across Puppy in the middle of something that he would prefer no one else to have noticed. Meanwhile, pre-teens Charles and Ethan are on a mission to purchase illicit magazines, and run across something very unexpected in the woods.

What ensues is action packed. There are chases through woods and underground tunnels, mysterious communes with ageless leaders, unspeakable ceremonies with alien beings, and at the end of it all our protagonists are faced with crushing, life altering decisions.

This book is great fun, not only because of the original story and interesting characters, but also because of Carson’s writing style. I found hints of the styles of Philip K. Dick, Hunter S. Thompson, and Stephen King, with the influence of the Weird woven throughout. The combination of ideas and techniques creates a work which is something completely it’s own and which makes for a compelling read, all the way up to the fiery finish. Starr Creek will be available for purchase November 15th. I highly recommend picking up a copy!