Here’s what I’ve been reading and watching this week:

Found footage films are pretty much hit or miss at this point. However, I have to say that I was definitely enjoyed As Above So Below. The movie didn’t appear to do too well in the theaters, and was only there for a short time, but I found quite a bit about it to like.

The focus of the film is Scarlett, a treasure hunter type, who is following up on her deceased father’s life’s work – searching for the philosopher’s stone. (Note: If they had marketed this aspect of the film when it came out, I would have headed to the theater for sure!) After finding bits and pieces of clues around the world, she eventually ends up in Paris, where she enlists the help of her estranged friend (lover?) George. George is reluctant at first – still a bit bitter about their last escapade where he was apparently left by her in a Turkish jail – but eventually can’t resist and joins up with her to search for what they hope will be pay dirt in the catacombs of Paris.

Scarlett and George find the final clue to the philosopher stone’s location hidden behind an exhibit in a museum accompanied by the Latin acronym which translates to, “Visit the earth’s interior parts; by rectification you shall find the hidden stone.” They quickly realize that they will need help locating a hidden tunnel, which is supposed to be beneath the grave of the renowned alchemist Nicholas Flamel. They collect a crew of peeps, all equipped with headlamps and cameras. and are led by self-trained guide Papillon on a search for the hidden tunnel.

And things begin to go wrong almost immediately. After climbing through a particularly large stack of femurs, they find themselves right back where they started. Tunnel entrances that Papillon has never seen before appear, as do a piano, a ringing telephone, a burning car and other things that shouldn’t possibly be there, including a former pal of Papillon’s who was thought to have died in the tunnels on a previous adventure. This mysterious addition to the group proceeds to help them find the way out by leading them deeper and deeper. 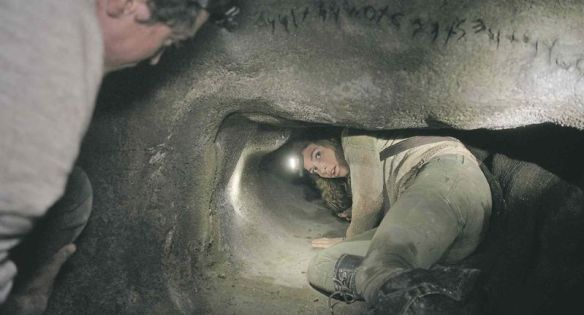 Eventually, they find a treasure chamber, and a stone that appears to have the magical capabilities rumored of the philosopher’s stone. But, of course, like all treasure chambers, there is a trap. The way out is closed to them. It is in this room that Scarlett encounters an painting on the wall, which indicates the alchemical principle of “as it is above, so it is below, as it is within, so it is without.” They are forced to continue further into the catacombs, descending ever deeper. 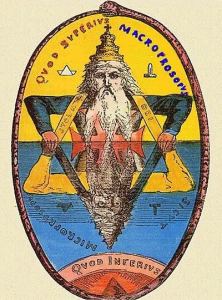 There are several comparisons to the hellish descent in Dante’s Inferno, and things really begin to get scary when they are forced to enter a small, crawlspace below the inscription, “Abandon all hope ye who enter here.” On the other side, they encounter a room the mirror image of the one they just left with the same painting reversed and at this point the trip gets even creepier. Demonic creatures lurk in the shadows, people are hurt and killed, horrible secrets from their consciences come back to haunt them, and it becomes increasingly clear that they are progressing through a horrific mirror image of their journey as each cavern they enter is an oppositely oriented duplicate of the ones they previously explored.

The key to the movie is the fact that they must “rectify” themselves in order to find the stone. And, eventually Scarlett catches on to this. I won’t give away the ending, but it is definitely interesting. Between the treasure hunting aspect, alchemy references, Dante, and the catacombs themselves, this was a movie designed to hook me. If you are into the same type of things, you should definitely check this one out!