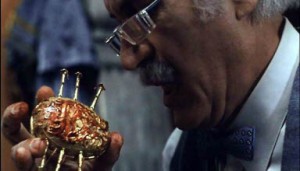 One of the directors that I am always excited to see something new from is Guillermo del Toro. His films always seem to manage to strike a deep chord with me. There is a mixture of fantasy, horror, and beauty that is undeniably addictive. I think the first film of his that I saw was Cronos, about a delightfully creepy piece of scarab jewelry that likes to latch onto people and suck out their blood. (Interestingly enough, this only increased my interest in scarabs.) In return, it provides youth, but of course there is always a price for that sort of thing. And, in this case, there is someone else who wants the cronos device. Murder and mayhem ensue.

My favorite del Toro film, though, is The Devil’s Backbone, which I don’t

think many people know about. It may be because this is foreign language film, and I think that they can often be overlooked. This, however, is one of the best ghost stories that I think I’ve ever seen. The setting for this film is an orphanage in the Spanish War. Carlos is the newest boy and, guided by a ghostly presence, stumbles upon a secret. This movie is scary. The lighting and cinematography is perfect, as always in del Toro films, and the ghost boy is just really creepy looking. However, the feeling of abandonment and desolation that is communicated by the setting and the theme of the orphanage just add to the overall atmosphere.

Pan’s Labyrinth — another foreign language film, which won three Oscars — is what really made del Toro popular. I love this movie, too. It shows off del Toro’s mastery of the dark fantastic at it’s best. From the grotesquely beautiful creatures that populate the fantasy world, to the stark, bleak realism of Ofelia’s existence in the household of her fascist stepfather, this movie is dark beauty. It’s an interesting take on Shakespeare, too. In this film, though, Ofelia’s fantasy world becomes visible to the viewer. We are able to see her reality and understand her attempt to escape and her hopes for an alternative life in which she is valued and loved.

In ventures into the mainstream, del Toro was successful in directing Mimic, with that creepy bug/man monster. I’ve watched that movie at least five times just for the thrill of horror at the scene where the darkness shrouded profile of a man morphs into something less than human. Shudder. He also directed the first 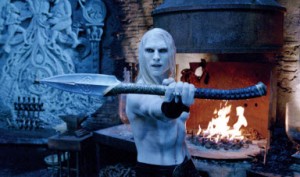 two Hellboy films, and has been announced as the director for a third. These movies are an unbelievably fun blend of comedy and dark fantasy. Both films showcase the same interesting and haunting monsters that have begun to define del Toro, but the second film — Hellboy II: The Golden Army — which includes interactions with the dark fey and the fantastical underworld, really showcases the beauty I associate with a del Toro film. The lighting is always perfect for the scenes, and I especially like the depictions of the underworld characters and settings.

In addition to directing great films, there have also been several “Guillermo del Toro Presents” films that have been successful. These are typically films in which he has been involved as a producer, and this label has begun to be a good advertisement for the type of film to expect, since they do a great job of representing the dark fantastical and horrific that del Toro uses in his own work. The most recent of these was Mama, which twisted the lengths to which a mother would go to “care” for her children. Before that there was Don’t Be Afraid of the Dark, which provided me with some very good reasons to be afraid of the dark and avoid exploring small, enclosed spaces. This is a movie that shows in detail how all of the bad fairy tales can definitely come true and that the fairy creatures might not really be so nice and beautiful as we have previously been led to believe. Additionally, it is proven (once again!) that a cheaply obtained decrepit mansion is to be avoided at all costs.

But, before either of these, was yet another foreign language film that I haven’t heard many people talk about called The Orphanage. I think this is possibly one of the most haunting films 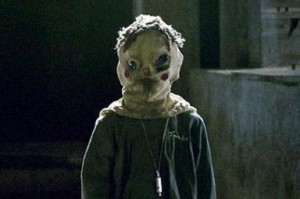 that I have ever seen in my life. I own the film and have not been encouraged to rewatch it — the memories are enough. The plot focuses on a couple and their young son who have purchased a large house (yep, creepy large house at a bargain!) near the ocean. They intend to use the house as an orphanage for disabled children. However, on opening day, a child with a strange baglike mask over its face appears, disrupting the opening celebration and terrorizing the mother. Subsequently, her young son goes missing. The way that the story plays out is unexpected to say the least. Seriously, I think this one scarred me a little! (However, I would still definitely recommend it!)

So, with my love of del Toro and del Toro Presents films, I was excited to find the trilogy of

books written by Guillermo del Toro and Chuck Hogan. The Strain takes the pandemic and vampire apocalypse tales and adds a twist. Vampires have have arrived, taken over, and begun capturing humans and creating farms to ensure that they have enough blood to feed themselves. These books focus on how this depressing state of events starts, progresses (The Fall), and then comes to an end (The Night Eternal). These books are dark, like the vampire version of The Walking Dead. Humans have been reduced to a bare minimum of survivors and are resorting to eating cat food and, gulp, rats. These vampires definitely don’t “sparkle” and they are not busy becoming rock stars, they are organized and focused on taking over the world and completely enslaving the human race. We see a rag-tag team of heroes try to take on these monsters, and there is plenty of violence, blood, and gore. I definitely liked these books, but there was none of the redeeming beauty, dark as it may be, that we see in del Toro’s films. There is a blanket of hopelessness that covers these stories, and they were not a trilogy that I could have read quickly, one right after the other. So … great horror! It looks like there are plans for a TV mini-series in the works, so we may see The Strain on the screen soon. I highly recommend checking out the books first, though.