One of my favorite new character finds is Repairman Jack from F. Paul Wilson’s series. The first book of the series, The Tomb, introduces us to Jack. He’s a sort of detective “fix it” man, who takes on jobs that no one else wants — and solves the problem in pretty much whatever manner works best. He’s not really too concerned with laws. Jack lives off the radar – no bank account, no social security number, no way to trace the guy. He has an elaborate scheme of forwarded telephones and post office boxes across New York. At first glance, he seems like bad news. But, Jack has a human side to him, and some ethics. He loves old movies and typically has them continuously playing on the TV in his apartment, which is stuffed with all kinds of old movie memorabilia. Most of the time, though, the movies Jack is watching are old horror flicks.

The job that Jack takes on in The Tomb is pretty much something out of a horror movie. 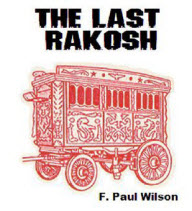 There is a magic necklace, shady foreign characters, and eventually we are introduced to one of the more scary monsters that has been dreamed up. The rakosh are humanoid creatures covered with shark skin and sporting shark-like heads. There are a boatload of them and they do their master’s bidding with a vengeance. They are fast, vicious, and hard to kill. And, of course, Jack ends up having to kill quite a few of them. If you try The Tomb and like it, there is a novelette, The Last Rakosh, that follows up Jack’s adventures with these creatures.

I think my favorite thing about Repairman Jack is that he is one of those everyman heroes. Things don’t always go as planned, sometimes he gets hurt, and he definitely has some weaknesses. He’s like the Indiana Jones of his profession, and this makes it easy to identify with him and root for him. While he can be a lethal and merciless killer, he never takes on work that isn’t justified. He helps damsels in distress and people unfairly targeted. If monsters or unsavory folks get in his way, he deals with the problem.

This first book got me hooked on the Repairman Jack series, and fortunately Wilson has written several more. Not all of them have supernatural or horror aspects to them, but when they do they are always fresh and interesting ideas. Wilson has also done some interesting cross-over between the Repairman Jack series and another series, The Adversary Cycle. The Tomb is the second book in The Adversary Cycle, the first of which is The Keep, a title that may be more well known based upon the rather horrible movie that was made from it. (Just as an aside, the book is better than the movie, as is usually the case.)

For more on Repairman Jack, check out F. Paul Wilson’s official website, which has one of the best taglines ever: You Don’t Know Jack.

1 thought on “The Tomb: Repairman Jack”