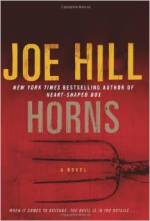 Recently I read and was blown away by Joe Hill’s NOS4A2. So, I decided to write something up on Horns, too. The short summary of the book is that a guy wakes up with horns on his head and things get weird. However, this book is a lot more than that. It does some intricate footwork with childhood and fantasy, the difference between good and evil, and horror and comedy. The characters feel real, even when the weird stuff starts happening. Ig is clumsy and honest and often less than likable and, through it all, completely human. Hill pulls you in immediately

Ignatius Martin Parrish spent the night drunk and doing terrible things. He woke the next morning with a headache, put his hands to his temples, and felt something unfamiliar, a pair of knobby pointed protuberances. He was so ill — wet-eyed and weak — he didn’t think anything of it at first, was too hung-over for thinking or worry.

But, when he was swaying above the toilet, he glanced at himself in the mirror over the sink and saw he had grown horns while he slept. He lurched in surprise, and for the second time in twelve hours he pissed on his feet.

Ig’s day continues to get worse, and we learn that he has been accused — but never convicted — of the murder of his ex-girlfriend, Merrin, almost a year before. Small town life has made it hard for him. Many believe that he is guilty, and so he pretty much has had to deal with his grief on his own. On top of this, he now has the horns to deal with, which seem to compel whoever he is around to tell him — in complete honesty — all of their deepest, darkest desires. People seem to notice the horns, but not really find them unusual, and they kind of forget about them as soon as they’re not around him anymore. As Ig goes from family members to friends in search of help, he begins to learn more about the truth behind Merrin’s death.

Woven between the present day situation are flashes back to Ig’s childhood when he and Merrin first met in church (he thought she was flashing him a message in Morse code with her gold cross), and to a summer filled with cherry bombs (the real, old dangerous kinds), wild rides down a hill in a shopping cart (naked on a dare), and his first interactions with the third member of their little group, Lee.

The contrast of the raw feelings from childhood — first love, the efforts at fitting in — with the darker and more disturbing feelings of Ig’s present is interesting. Ig and Merrin seem to be made for each other, and at one point find a magical treehouse where they spend a few snatched hours together. They can never find that treehouse again, and it seems that the time they shared there was a doorway, or at least the beginning of what will happen to both of them as they grow into adulthood.

Ig’s transformation into the physical representation of what we typically would consider The Devil, is in marked difference to his all consuming, righteous need to find and punish Merrin’s killer. Hill works this transformation incrementally throughout the book, and there are aspects of it that are very clever, such as how Ig obtains red skin and a timely scene involving a pitchfork.

Throughout the book,  though, there is the horror of loss of love, loss of world, and loss of self. Ig has to deal with losing everything, piece by piece, and he has little control over what is happening to him. Hill brings the book to closure with a bittersweet finale that I will not forget.

I am looking forward to seeing what the new film of the movie will bring, but I would highly recommend that you read the book first!