This is a repost (which actually is yet another way to provide an example of the level of my Phantasm addiction). I watch the original movie in this series often, and it has been a Halloween favorite for many years. While the Tall Man is technically an alien, there are many horror elements in the film. I’m also extremely excited about the upcoming installment in the franchise to be released next year, Phantasm: Ravager.
(Check out the trailer!)

I have been having a love affair with the Phantasm franchise for probably more than 20 years now. It started out innocently enough, just another horror movie that I hadn’t ever seen before, and then, of course, the two sequels — Phantasm II (1988) and Phantasm III: Lord of the Dead (1994) — followed later by what appears to be the final chapter, Phantasm IV : Oblivion (1998). The original came out in 1979, and I have no idea how long after that it actually was until I saw it, but I immediately fell in love with the flying silver orb, whizzing along the hallways with that supersonic keening sound, just dying to chunk itself into someone’s forehead so it could churn out that gout of blood. Whoever came up with the orb really added something to the horror movie culture!

And, I was young enough to have a huge crush on Michael — he was so cool. Riding his motorbike in the cemetery, driving that black muscle car around and knowing how to work on it. (Seriously, Jody, your younger brother is the one fixing your car?). 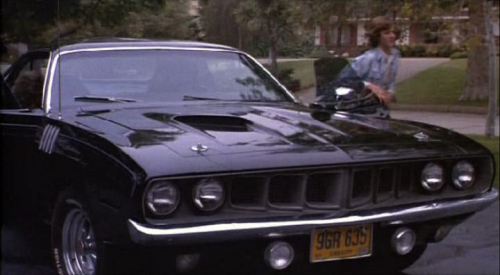 Once I’d watched the first one, I was hooked. I especially remember the trailer for the second one, and remember watching it with a roommate who also liked horror movies.

I kept re-watching them until the third one came out. At that point, I was older and wiser and had realized that Reggie was definitely where it’s at. He could drive and fix that awesome black car, and was weaponized to the hilt. (And, by the way, all of us Supernatural fans owe a huge debt to the second and third Phantasm movies. If you doubt me, just check them out.) Reggie’s charm and skills always got him the babe (at least for awhile, until she went weird), and the bald with a ponytail thing just seemed to work for him somehow. Who knew that a simple ice cream vendor that just wanted to strum some guitar tunes in his free time would end up being the biggest hero of the series?

Waiting for the fourth installment felt like it took forever. At one point I cycled through all the previous films in a week’s time. I was like an addict, or maybe an 8-year-old with their favorite film (or maybe those are both kind of the same thing). Once it finally came out, it was clear that Michael (the original Michael!) had grown up and was ready to take on the Tall Man in a final battle. He was back from the beyond, and you could tell that it had changed him. He was sadder, tireder, ready for it to be over. While this last installment wasn’t the best movie in the series, I was still pretty much just happy to revisit all those characters and themes, and to let Michael and Reggie have a final say. 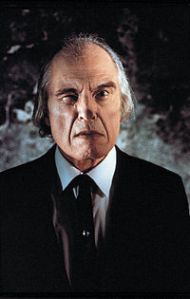 So, what’s kept me re-watching these movies over the years? Well, all of the above, but Angus Scrimm’s Tall Man keeps me coming back, too. No one else can growl “Boy!!” in quite the same way. And, what about all those awesome slo-mo sequences of him walking? Or driving that hearse like a madman? Or just appearing out of nowhere, and towering and glowering and grabbing at you with those clawed hands? I love the special edition DVD of Phantasm, because it starts out with Angus Scrimm introducing the movie and talking about being asked to audition for the part. The director told him he would be playing an “alien”, which Scrimm took to mean “foreigner”, until he got the script!

There’s also the overall mood and ambience of the movies – it’s always dark or darkish and it feels like the town or place the characters are in could be the last inhabited area on earth. This is especially so in the second and third installment. And, of course, there’s the Phantasm theme. It’s got a really 70s, Dario Argento feel to it that works for me. There’s the other creepy characters that keep popping up, like the girl and her blind, fortuneteller grandma in the first movie, or the girl that keeps seducing guys at the bar and taking them out to the graveyard to get it on (and sometimes her face looks like the Tall Man’s), or the girls that are horrifically transformed in the second and third movies. There’s the weird gateway to the other dimension that just begs for you to put both hands on it, and the chaos that ensues once someone finally does. Oh, and there’s the crazy squashed hooded creatures that the Tall Man is apparently stockpiling and using as slaves, which are constantly running through the bushes or rolling out from behind things in the basement of the mortuary.

I guess that for me these movies just have an originality to them. There’s nothing else out there quite like them. A sense of isolation, loneliness, and an impending doom worse than death permeates them. A helplessness runs throughout, from Michael’s inability to stop what he knows is happening in the first film, to Reggie’s inability to save Michael and his persistence in fighting something no one else seems to know is happening in the second and third, to the final fight of Reggie and Michael in a battle where they both know it’s unlikely there will really be a win, and where, again, Reggie will not be able to save Michael. The idea of our world being systematically plundered while no one is looking is frightening, as is the idea of a doorway to another dimension that might exist right in the next room. The Tall Man’s absolute disdain for humans, his overwhelming strength, his seeming ability to be everywhere or anywhere, and his delight in using those clearly technologically advanced spheres of murder is monstrous. There is no appealing to this creature for mercy. His ponderous, long gait is patient in the knowledge that he will eventually get you, no matter where you run, how deeply you hide, or how savagely you fight back.